The Spanish team of the Jucivol Project organized an Advisory Board in the Main theatre of Burgos. During the session, the youngsters presented their Action Plans describing to the public the future actions they will develop in their volunteer programs. At the end, the participants received a diploma for their involvement and knowledge they have adquired during the process. They also could enjoy a mid-morning snack.

35 people attended the event highlighting the presence of the City Councilor of Social Affairs, the Vice-chancellor of Research and the Director of the Cooperation Centre and Solidary Action of the University of Burgos. The University of Burgos TV prepared a video in which Spanish Jucivol representatives described the experience of the project in Burgos (Link). Under the headline `Diplomas de integración´, the newspaper Diario de Burgos echoes the “Advisory Board”. TUTORIAL WITH PROFESSIONALS AND YOUNGTERS (Groups 1 and 2), BURGOS 24 APRIL 2018

Tutorial with Professionals and Youngsters (Groups 1 and 2), Burgos 11 April 2018 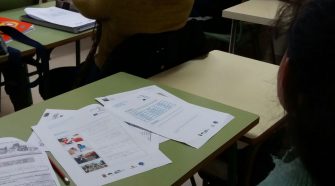